The digital signage market is growing fast and will continue to do so over the next few years This has led to many new business opportunities.

According to this study, the North American market will be $10 billion Asia's 9.14 billion, with the European continent standing between these 2 continents with a value of around 9.5 billion dollars.

All market studies support this fact, with only slight fluctuations in the CAGR, depending on the forecast period as well as the date of the study. Following are some of these of the overall market growth rates indicated by 3 major market studies conducted in 2019:

In a more distant forecast by Grand View Research, CAGR will show a value of 7.9% between 2020 and 2017, estimating a global market value of $36.79 trillion in 2027, which indicates that it will be a decade of full growth for Digital Signage. According to this study, the Asian continent will witness a CAGR of 9.4% between 2020 and 2027.

In Europe, according to a study on the growth of digital signage carried out by Mordor Intelligence, the CAGR value is even more optimistic, showing a value of 15.6% for the period 2019-2024The big jump in growth is forecast for 2023. It should be noted that the European countries currently with the largest market share are respectively: the United Kingdom, Germany, France and Spain. 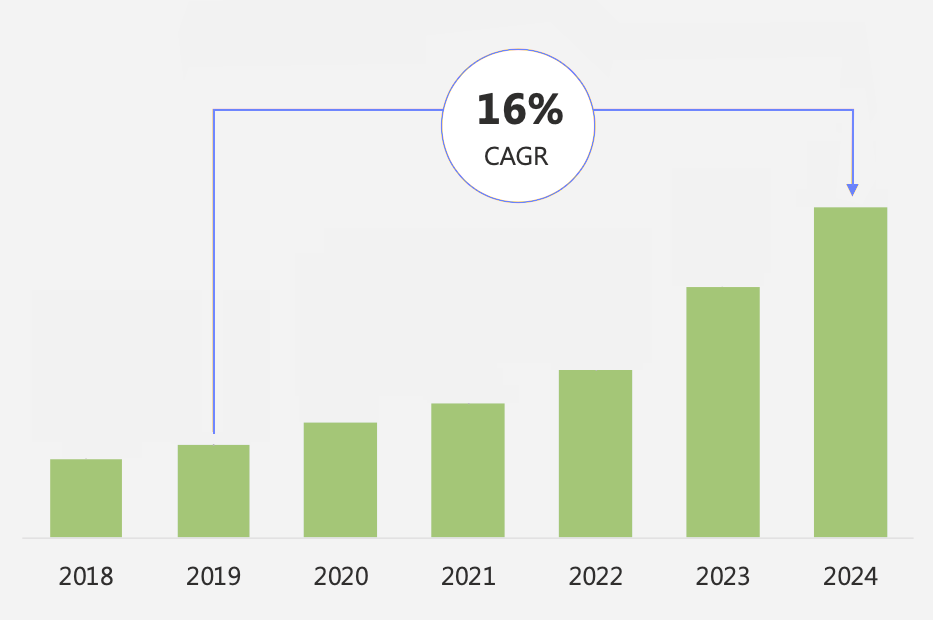 At world level, according to Technavio´s study, based on the analysis of several regions and their contribution within the global digital signage market, the estimate is that the countries that will have the most expression for global revenue will be the USA, China, UK, Canada and Japan.

Among the various factors associated with the great growth of Digital Signage in recent years, the following stand out the large reduction in the cost of global solutions, the result of a very significant reduction in hardware costs.

Not so many years ago, Digital Signage projects were reserved only for high-end entertainment establishments or high capital companies. These days, much has changed, and it´s increasingly commonplace for great looking promotional screens to be displayed in any local shop or restaurant, whether to showcase a digital menu static or make better use of it with a interactive solution.

Within this drastic decrease in hardware costs, are the decrease in the costs of the screens as well as the players that connect to the screens, managing the content to be broadcast through its Digital Signage Software which communicates with the CMS (Content Management System).

The recent paradigm of System on Chip (SoC) technology has been responsible for a further decrease in these costs Digital Signage screens now have a built-in media player, no longer requires the use of hardware external to the display to run the software. In addition to eliminating the cost of purchasing an additional player, there is also a reduction in costs, not only in terms of installation (because it is simpler), but also in terms of maintenance There is one less device in the system to manage and maintain.

By way of example, o World VDS Digital Signage software of Amplitude Net which was already available for various systems such as Windows, Android, Linux and Raspberry Pi has recently been expanded to be compatible with TVs from leading manufacturers that have SoC such as Samsung LG and Philips, thus no longer requiring hardware external to the screen to run the World VDS software where such screens exist.

With this advance, our WorldVDS software has become the only Digital Signage Software worldwide, which can be used natively on SoC displays, which is also available for multiple platforms such as Windows, Android and Linux, in which it also includes the Raspberry Pi which is currently the cheapest hardware in the world capable of being used for Digital Signage (as Raspberry Pi oriented software is only available for this device, due to the fact that the specifications of this hardware are quite particular and limiting).

The Growth of Digital Signage Advertising

Much of traditional advertising (in its print form) is being replaced by Digital Signage, aiming at attracting and satisfying the customer. With very few exceptions, printed signage is almost always single-use, including billboards and posters, which are discarded after a short period. Digital Signage on the other hand, offers great flexibility, with the possibility of being transmitted varied information, through a highly engaging and always updated content, attracting the attention of consumers to its adoption. In addition to thisThey are easy to manage compared to traditional advertisements, can be easily differentiated by the region where they are broadcast, and can be updated in real time as the availability of advertised products changes.

Among the many benefits of Digital Signage is the fact that, according to extreme media, digital displays captured 400% more views than static screens, as well as the fact that 4 out of 5 brands have identified a 33% increase in their sales after using Digital Signage.

Given this reality, according to PQ Media, Digital out-of-home (DOOH) advertising accounted for 28.3% of all out-of-home (OOH) ads in 2019, with a projected increase of 38.3% by 2023. In addition, DOOH was the main driver of OOH advertising growth worldwide in 2019, which was 10%

The study published by the OAAA (Out of Home Advertising Association of America), indicated OOH ad revenue in 2017 of $7.7 Billion, with Apple, Google and Amazon in the top 10 advertisers.

In the US DOOH advertising spend forecast in 2019 was $4.5 billion. According to an article by Adage, "Zenith predicts that DOOH will grow faster globally than all other buying methods, and PricewaterhouseCoopers predicts that DOOH advertising revenues will surpass traditional media spend as early as 2020, growing at a rate of 15% per year over the next four years.".

In the UK, one of the largest Digital Signage markets in Europe, according to Campaign, Brits saw up to 1.1 billion DOOH ads during a week, with numbers up 36% year-on-year, reinforcing the huge growth of Digital Signage in the country in 2019.

The Digital Signage market is completely fragmented by a large set of companies sharing the revenue from the same. The overall universe of this market is broad and is typically segmented medially on the following factors:

By Application (or Market)

Since Amplitude Net holds the World VDS Digital Signage software which can be used on a wide range of screens and media playerswe present solutions for all these indicated segmentations, having several reference case studies for a large part of them.