After the graphic change in the Super Bock Group broadcast In November 2017, when it changed its identity from Unicer to Super Bock Group, the group also started to make available its Corporate TV broadcast to all its employees through its intranet.

Super Bock Group joined the World VDS Corporate Television system of Amplitude Net in 2016 and at the moment has more than 3 dozen screens in its two head office buildings in Leça do Balio as well as in its premises in Pedras Salgadas and Miraflores.

The group has two differentiated broadcasts, a public one that is shown on reception screens and a private one that is broadcast in the following places internal to the group:

The issue consists of the 3 global headings, "Business", "Sustainability" and "Culture and Sport", as well as two additional "News" and "With Us" only existing in the internal channel.

In 2015 the Super Bock Group (then still Unicer) celebrated 125 years of existence The President of the Republic, Aníbal Cavaco Silva, presided over his official commemorative ceremony and visited the new industrial complex, whose works involved an investment of over 100 million euros.

The Super Bock Group is today a company with a majority of Portuguese capital held in 56% by the VIACER Group (Violas, Arsopi and BPI) and in 44% by the Carlsberg Group, being its extensive catalogue comprising the following brands:

This new line of beers, totally created and developed by the group's master brewers, will be produced on a large scale using the dry hopping technique, which is an innovative and unprecedented process in Portugal, consisting of the late addition of hops in the brewing process, intensifying the aroma and sensory experience. 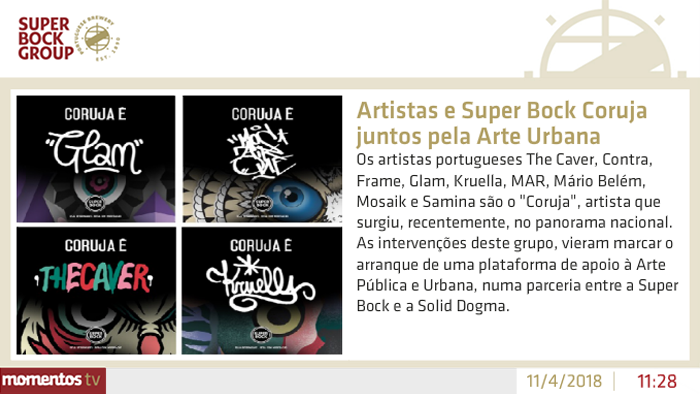